MATT COPLON – COLLAPSING INTO THE WHATEVER 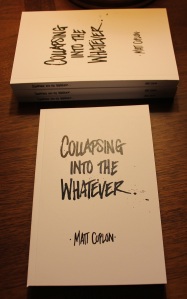 I’ve known Matt Coplon since around 1996…I was helping out a friend who had a small DIY punk/hardcore record distribution in France. Matt was the singer of a band called REVERSAL OF MAN. We exchanged letters to distribute his records. We didn’t even know we were both riding BMX until one of us mentioned it in one of these letters. I think I ended up going to Tampa in 1998 and was blown away by the music scene there, even more than the riding. Matt was one of the first Heresy supporters out there, please check what he has to say about his latests projects. True combat wounded veteran !

Collapsing into the Whatever started out as a pipe dream. A blog post. That turned into two. That soon tripled.

16 months later, I had compiled almost 45 short non-fiction vignettes: of false possession, electricity poaching, of run-ins with satanists, urban myth, of travels through Europe within the 90’s punk scene, stories of the incredibly mundane, stories of absolute absurdity, of life and death in Tampa.

Today, almost three years down the creative road, the blog morphed from the digital ether into a 206 page, physical, printed book.
One that, I’m happy to say, is available as of today.

Why this Bmx edit?

Within the writing process, riding, for me, was a core component. In order to brainstorm, in order to write, and finally, in order to edit, the almost daily sessions through Tampa, combined with a very fortunate travel schedule through Profile, worked as the impetus for continuing the arduous process.
Beyond that, like the 40 personal tales in CITW, each of these clips contains its own story. From a basic aluminum rail, off limits for forever until the city’s morgue closed and moved locations. To a handful of spots on both the east and west coast I had always, for years, anticipated riding (thankfully I got to them this summer). To the last clip: A rail hop in my neighborhood that I’d passed for over a decade. After having nightmares about giving it a go, I finally did so, making myself run at it on my 37th birthday.

If you’re interested, Collapsing into the Whatever is now available.
If you’d like a copy, please contact me at xmattcoplonx@gmail.com
Thanks for reading. Thanks for watching. And thanks to these people/companies for years of support:
Profile Racing, Deco Bmx, Adi Gilbert and Folklore brand, and to all my friends who are always down for a good session.
Besides the several tripod shots, thanks to these folks for additional filming (I always hate to ask): David Gibson, Matt Arnold, Steve Caro, Zach Rogers, Dillon Leeper, Mark Mulville, and Jared Eberwein.

***The song I chose for this edit, Combat Wounded Veteran’s “And now that I’m cornered by Vermin,” has an integrated story: The drummer, J.H., was the catalyst for CITW on a visit to his house back in 2011. A great story teller, I’m indebted to his knowledge and whit. A more detailed story is included in the introduction to the book.